Operations at mines are often planned based on a theoretical design that rarely matches reality. To optimize operations, you need to know what you are working with.

Periodic Pit Analysis are Needed In Order to Meet Targets

Designing a mine, planning its layout, the benches, the roads, the berms, the slopes is necessary for determining operations and logistics, to forecast materials and yields, to predict the lifespan and profitability of the mine. Over time deviations from the model accrue. Deviations in the excavation, the volume of the material blasted from the bench, wear and tear, and weathering. Deviations that occur from having to work with the local geology or even from slope failures and workarounds. Overtime these deviations add up and your mine, as it exists in the real world, barely resembles the reality.

The variation between the assumed mine plan and the actual mine is a problem- operations are planned based on the assumptions in the model mine- not necessary the reality. So it is necessary to periodically reconcile the structure of the mine as it exists and as it was planned. This geometric reconciliation, or pit analysis, is the quantification of the differences between the real state of the benches, slopes, banks, berms, and other features of the mine as it truly is versus its original design are critical to meeting safety, production, and operating cost targets.

There are 2 issues with traditional pit analysis methods:
1. It's expensive and
2. It's immediately obsolete

Because mines exist in the real world, they are not static images in a database, they are living breathing organisms that change daily. They require regular and continuous data capture, analysis, and validation to ensure that the mine is living up to its full potential.

Traditionally pit analysis approaches have been long arduous affairs that require significant investments in man hours, specialized equipment, and training. Surveying teams would trudge the site for days painstakingly gathering laser data points which would then involve more hours uploading into software to create models that require even more hours of manipulation and analysis. By the time you have your geometric reconciliation it is already obsolete. You invest days or weeks and vast amounts of money into a process that is out of date as soon as it is handed to you. No wonder only the largest operations can afford to regularly carry them out and with entire dedicated teams and divisions!

Modern technology has changed how data is collected and handled.

First, drones made their debut a decade ago cutting surveying time from days to minutes. They can fly an entire mine site, take hundreds of pictures with any of a dozen drone mountable cameras or sensors in under an hour with upto centimeter level accuracy.

Then, cloud based software platforms evolved to allow immediate uploading and processing of data in near real time. You could have an incredibly accurate map of your entire site every day if you wanted and for less then the cost of a single terrestrial surveying operation only a few years ago.

Now, Artificial Intelligence (AI) has entered the game. Measurements, calculations, comparisons, maps that used to take people days or weeks to calculate is being performed by computers in seconds. The source of the data is irrelevant to AI, it can come from drones, satellites, lasers, sensor, anything "smart" enough to record the data it encounters. Mountains of data that seemed insurmountable only a few years ago are effortlessly being managed by algorithms.

Drones and cloud data processing changed everything, now Artificial Intelligence is taking pit analysis to the next level

Pit analyses of entire mine sites can be done by specialized software platforms in minutes. The AI collects data from drones, satellites, lasers, or other sensors and creates clear and concise charts and reports identifying patterns in the data in minutes. It can stitch together images into a 3d, 2d, orthomosaic, topographical, or other model with centimeter level detail. From that data machine learning and computer vision algorithms automatically detect, measure, and construct models for: 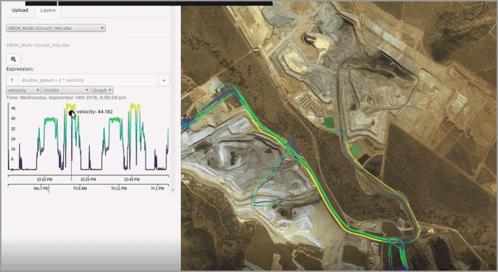 Wanna work easily with remote team members? No problem. Using the cloud based option you can access all of your site data and reports from anywhere in real time enabling never before seen collaboration between team members.

Pit Analysis doesn't have to be painful. With the technology available today, it can be accomplished in near real time, for a fraction of the cost. Optimize your operations by automating your reconciliations.

The challenge of elevation changes in autonomous drone flight planning is becoming a big problem as drones are being used more and more for mapping an ever increasing variety of site features.

—
How AI is Making Pit Analysis Faster, Easier, and Safer
Share this