Technology can radically improve your drilling, particularly when you add the drones and data analytics/AI. Combine drones and data analytics with a smart drill and you have the perfect storm of drill enhancing technological muscle at your disposal. These tools increase efficiency by drastically increasing accuracy, cost savings, and more importantly ensure safer operations. So what are the technologies available and how do they interact?

It’s easy to see how drones can be used for agriculture and surveying. But it’s a good bit harder to see how they can be used in industries like mining, drilling, or blasting. After all, drones fly in the air, drilling is underneath the ground. But don’t be mistaken, like so many other industries, drones are a game changer for drillers as well.

Drill & blast technicians need maps of the benchs and terrain where they are to drill.

Drones are the most effective method available today take pictures of the site.

Traditionally, drillers and blasters used data gathered by terrestrial laser scanners to map their drill holes, however it has been exhaustively proven that a drone can collect the necessary data in a fraction of the time it takes two guys lugging equipment to trudge across the site taking point after point of readings. This saves the project vast sums of money on labor costs plus it allows projects to move significantly faster. Drones can do in hours what a surveying team takes days to complete. Need proof? Wingtra, a Swiss drone manufacturer, was able to use their VTOL drone to map Jellinbah’s coal mine in Australia at one tenth the time and cost of the airplane surveys they had been using and the enormous RTB copper mine in Serbia at 45 minutes flight time per pit- estimated to be 30 times faster than terrestrial methods.

Another powerful benefit of drone mapping, as opposed to terrestrial methods, is its ability to easily, quickly and frequently update and therefore create highly accurate maps regularly.

“Because a drone can map a site in a fraction of the time of other laser scanner methods, the mapping frequency can be significantly increased while still costing less than the laser scanning. If it takes one hour to fly over a site and survey it, and then another couple of hours for image processing, the site map can be updated every day- if not multiple times a day.” -Ravi Sahu, CEO Strayos

A driller working on a complicated or large project, can drill a part of the project then have a drone fly over to verify the accuracy of the drilled bore holes before continuing.

Image data gathered by drones can be processed in mere hours with up to cm level accuracy. The drone maps the site and GPS tags it, then the data is uploaded to a software platform that uses that drone images to build 2D and 3D models. If the software analytics platform is cloud based, like the one offered by Strayos, the upload and processing can be done instantaneously and the results are accessible from anywhere with wifi or an internet connection.

In no time you have a model of the bench that allows you to plan your blast holes. If the 3D model is interactive, you can map your bore holes and the program will analyze the layout and give you the expected blast results. You can make changes to the layouts and see how those changes affect the results in real time.

Advanced AI features, like Rock Mass AI, can identify geological properties from the bench face. This allows drillers to plan ahead for discontinuities, bedding planes, and other issues that they may encounter while drilling.

After drilling, the drone can reimage the site and the AI can identify collar deviations. Then, by adding bore tracking measurements, the software can model the drilled holes and compare those to the planned holes. This allows the drillers and blasters to better understand the exact situation and plan accordingly.

If this is paired with additional technology, like a smart drill, the benefits are even greater. 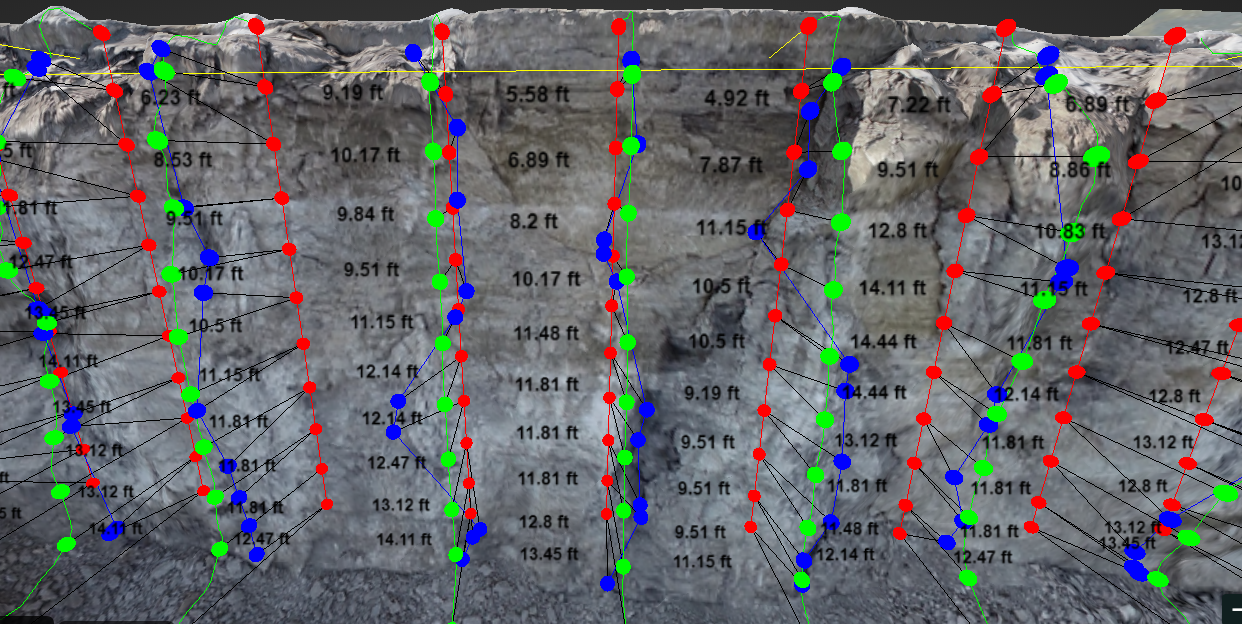 Smart drills are GPS and sensor equipped drills that record machine data automatically while drilling. The technology enabling smart drills is more consistent than an average drill operator, if not the best operators…yet.

Smart drills record data every second they are drilling including (Measure While Drilling or MWD): Penetration Rate, Feed rate, Time to Drill, Percussion, etc. not to mention the Collar of the hole, Water, Mud and any Voids. 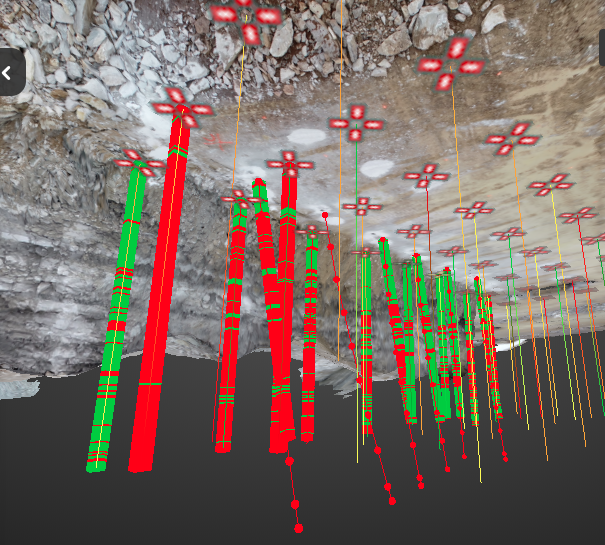 However, unleashing the true power of technology happens when you combine smart drills, drones, and the AI/data analytics program. The smart drill seamlessly integrates with the program allowing instant and automatic file transfers between the program and the drill. This means the data prepared by the program will be sent to the drill, which implements it- drilling the plan as mapped- automatically, and can be controlled by a drill operator located remotely.

The true power of technology happens when you combine smart drills, drones, and the AI/data analytics program

The drill records its data in real time and transmits it to the AI platform. The platform, drill, and operator can instantly react to changes in geological conditions. Another bonus, the platform records the data gathered by the drill and creates a log of the project for use in the next hole or the next planned drill.

What are some of the functions smart drills + AI/data analytics + drones can do?

Some Great Use Cases for Drones, Drills, and Data

Cloud-based AI and data analytics platforms allow the models and data to be accessed and manipulated by anyone on the team from anywhere at any time. All they need is the internet. This opens up the ability for teams to collaborate in before unimaginable ways. You can have your guy on site, another in the site trailor, one back at HQ and another working from home, all working together seeing the same data at the same time.

“By utilizing the three technologies together you are able to get better quality drill results which allows for better blasts and reduces the risk of harm, material waste, additional processing nonconforming materials, and unnecessary extra blasts.” -Jeremy Stafford, VP Ideal Blasting Supply

Using drones to map and model benches saves time, money, and risk. Drones allow you to start projects days earlier, if not weeks and saves tens of thousands of dollars on a project. The 3D interactive models generated from the drone’s data allows for drillers and blasters to experiment with hole size, depth, and placement to design for optimal blast results. The GPS tags enable any operator with a smart drill to realize a level of precision in their drilling that until now had been only possible by the best drillers in the industry. The models for the planned drill and the boretracked drill holes allow for first prediction and then actual identification of front row burdens. The AI also takes the drill hole information and uses it to predict fragmentation and muckpile shape and placement, allowing blasting to become better than ever. 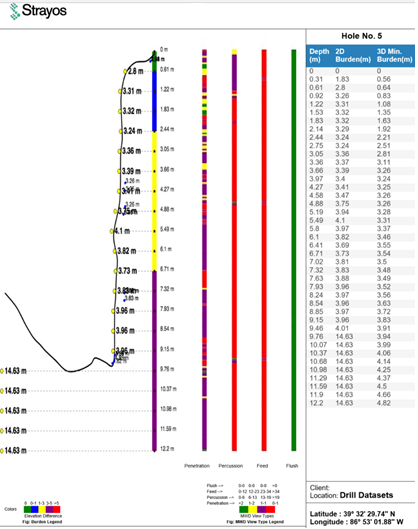 Exploratory Drilling for Mineral Detection and Mine Development

Drones with hyperspectral imaging or magnetometer sensors can do flyovers of prospective sites to look for mineral and ore deposits for future and current mines. Hyperspectral imaging sensors and magnetometers can detect lodes sub surface, GPS tag the location, and when combined with machine learning algorithms can create maps of potential deposits under the ground. Drillers using smart drills can drill sample holes and record the data the data the drill encounters. The penetration rate can be used to determine potential geological characteristics including using advanced AI models to predict and model potential undergound deposits.

“Sub surface detection of minerals and ore bodies by drones is the future.” --Ravi Sahu, CEO of Strayos

Drillers can then use the models generated to determine where to drill for core samples to confirm the models' predictions and further determine the location and extent of a load and its potential for mining. This is incredibly useful not only for large new mine sites, but also for older mines looking for additional veins where the known loads are already tapped.

This hyper efficient low disruption data collection and AI modeling system can additionally be used for locating small previously untappable deposits, those in remote areas, and those near population centers- an increasingly desperate situation in places like the EU where centuries of mining has used up all the easily accessible deposits.

Surveying and mapping was perhaps the first and still is the most obvious use for drones. When planning out installations for geothermal systems- for a commercial, municipal, or residential development, a drone can be used to survey the plot, collect images to create a 3D map and then add GPS coordinates that a driller can use to plan and execute a drill plan. Riding the green wave, Vancouver’s airport recently decided to switch to geothermal heat- an ambitious $350 million dollar project with more than 850 holes drilled so far. The advantages of using modern efficient planning and drilling methods instead of old-fashioned ones in a project of that size would be huge.

Technology is improving drilling operations at an exponential rate. Technology is making drilling faster, better, and more autonomous every day. Those who incorporate technology in their operations early stand a huge competitive advantage over their competition while those who delay get left in dust.

This article was featured in World Wide Drilling Resources Magazine

The Untapped Potential of Drone Data in Drilling & Blasting Strayos, in collaboration with Maurer & Scott, hosted its first Webinar on September 29, 2020. It was an amazing success. There were more